A Day with Nur Artiran

On a recent trip to Turkey led by Shaikh Kabir and Camille Helminski, our group was lucky enough to be invited to the Sefik Can Foundation, under the direction of Nur Artiran, one of Turkey’s most respected spiritual teachers. It gave us a valuable insight into Sufism as practised by modern Mevlevis in Turkey.

The Foundation’s centre is perched among wooded hills on the Asian side of Istanbul. We experienced Mevlevi hospitality as soon as our feet touched the ground. As the thirty or so of us disembarked from the coach, Nur Artiran stood at the roadside and greeted each of us individually in the Mevlevi fashion – by kissing us on the back of the right hand – and as we trailed through the garden into the centre itself, some of her students stood along the path with their hands on their hearts. Candles lit the way at our feet as we made our way up the stairs. 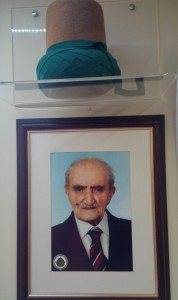 We found ourselves in an assembly room with serene views and a gentle breeze blowing through the windows. We were not the only visitors: also there was a French nun, Sister Marie Samuel (a great lover of Rumi), and a noted author and American shaikh from the Rifai order, Muhyiddin Shakoor. After exchanging gifts, Nur Artiran spoke of her teacher Sefik Can Effendi, illustrating in particular his great adab (courtesy) in dealing with people. She described how he went to great lengths to safeguard the reputation of someone who had brought a baseless lawsuit against him, and in so doing made us feel the great love and admiration he inspired in her. Throughout the day, she would continually illustrate some point by referring to Sefik Can Effendi’s character. As for Nur Artiran herself, though she is a very petite lady, one can sense an immense strength emanating from her.

As she spoke we had an opportunity to watch and experience the attentiveness of her students, as they anticipated the needs of their teacher and guests. It was clear a great deal of mindfulness and presence was at work behind the scenes. As they glided by with drinks and cushions, they were careful never to turn their backs on our teachers.  This formality was neither stiff nor mechanical, but rather a sign of sincere love and respect.

The centre is a mixed space and women play a prominent role. Most were dressed in a similar style: flowing skirts of white, blue or green, with blouses and waist-length jackets to match (like their teacher they did not wear hijab). The men all wore simple black trousers and white shirts. So a kind of uniform was being worn, at least for this occasion and for the sema (whirling) ceremony which was to follow.

The community has an accomplished orchestra made up of men and women. Women were the first to rise and turn for the ceremony, their long, elegant dresses flowing and their hair covered now in worship. It was refreshing to witness this celebration of feminine grace. As for the men, their simpler clothes (which highlighted the colourfulness of the women’s), and their taking second place, illustrated the modesty that men, too, can embody. The ceremony was quite beautiful and left many of us hoping that, with practice, we might one day emulate it in the UK.

Afterwards, we had an opportunity to look around the grounds that sloped down a steep hill in a series of terraces, containing a pond, a gazebo and vegetable patches on the various levels. Clearly the centre is well maintained and values home-grown food.

Inside the house, as well as the assembly room, there was a large kitchen, a large dining room and a well-stocked library. The centre has temporary guests, but nobody is permanently resident, and Nur Artiran and her students all live elsewhere. Normally, the students meet at the centre once a week for instruction, except perhaps when there are guests to entertain. The centre has a number of small, comfortable dormitories to accommodate guests.

This differs from the tekkyes of old in which mureeds would spend many years in residence with the shaikh. Since Attaturk officially outlawed it in Turkey, Sufism has not become officially accepted again, but we should not assume that this is the sole reason Sufi communities today are more discrete and no longer residential. Sufism has never espoused monasticism, and Shaikh Kabir and other Sufi teachers have suggested that our times require dervishes to move even further into the everyday world of the family and the workplace, integrating their spirituality fully into the mundane. Perhaps then, we were witnessing the infancy of a new kind of mixed, non-residential Sufi community.

After having explored the grounds, dinner followed which reminded us how much love and care is put into the preparation of food in the Mevlevi tradition. The food was delicious and rounded off a remarkable day.

Our visit left us with many things to consider: What can we learn from how the Mevlevi way is practiced by Nur Artiran’s community? How much of its formality would be appropriate to a Sufi centre in the UK or the USA? The spontaneity, informality and equality we value in the West have benefits, but have we lost sight of the virtue of respect and deference to valued teachers, and the mindfulness which can be developed through formality and ceremony? Would a centre require a teacher or shaikh to continually oversee its running and be present at every gathering?  Could a khalifah (a mature representative of the shaikh) oversee it, or could it even be run largely by students?

We thank Nur Artiran and her students for an inspiring example, and our teachers for taking us there.