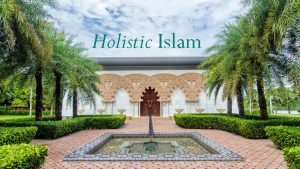 I can easily imagine the criticism that will arise from the title Holistic Islam, the title of a book of ours that was just published in September, 2017. Some will accuse us of trying to adapt Islam to a fashionable trend of modern society. Some will say there is no need for any word in front of Islam because Islam is the true religion and there is nothing about Islam that needs to change.

Our response will be that the word holistic is needed at this time as a corrective to help us understand the potential and truth of the phenomenon that was birthed 14 centuries ago and is still in the process of being understood and applied in human life. If it were not for the extremely unholistic manifestations currently claiming to be Islam, the idea of holistic Islam would not be needed.

Islam has been etymologically analyzed to mean “peace” and “surrender.” For some reason, the primary meaning of this word has been either completely missed or left in the background. Salima, the active participle of the root, means whole, complete, healthy, safe. Another form of the word, salim, the adjectival form, means whole, pure, sound, unblemished, unimpaired, and secure. The phrase qalb selim describes a healthy, purified heart, which is fundamental to spiritual well-being. So holistic is implied by the very word Islam. Holistic Islam, then, might be translated al Islam al Salim.

Some people will be shocked to see these two words together for quite different reasons. The holistic movement is a global phenomenon, a corrective to a worldview that has focused on the parts rather than the whole in every sphere of life. This has led to countless negative consequences for the environment, the economy, as well as for human life, itself.

Holistic health focuses broadly on all the factors needed for health: hygiene, nutrition, exercise, attitude, relationships, and emotion. The unholistic approach focuses mostly on the alleviation of symptoms. The alleviation of symptoms, however, may often ignore the root cause of the symptoms and even apply a medicine that reduces symptoms while compromising overall health.

If we consider the health factors that constitute human well-being described above, and if we recall the example and the teaching of the Prophet Muhammad, we will, I think, conclude that Islam was originally holistic. Islam as a way of life incorporates cleanliness, wholesome diet, physical exercise in worship, positive relationships, patience in adversity, generosity, altruism, and much more.

However, if that original message is reduced to a mere set of rituals and rules enforced primarily through fear, with attention focused on how others are following the rules and prescriptions, the heart will be severely constricted.

Furthermore, if an interpretation of Islam becomes a rationale for isolating one portion of humanity, Muslims, so that they look upon the rest of humanity as “other,” that interpretation is betraying fundamental spiritual values. Finally, respect for humanity as a whole is enjoined upon Muslims: O you who keep the faith! When you go abroad in the way of God, be clear and circumspect and say not to anyone who offers you a greeting of peace: “You are not a believer!”

[Qur’an 4:94] To each community among you We have prescribed a Law and a way of life. If God had so willed He would have made you a single people, but His plan is to test you in what He has given you: so strive as in a race in all virtues. The goal of you all is God; it is He that will show you the truth of the matters in which you differ. [Qur’an 5:48]

To perpetuate a suspicious and judgmental attitude toward so-called “nonbelievers,” is also a betrayal of the fundamental principles of mercy and compassion which are the absolute foundation of the divine message. What began as a radical interfaith movement at the time of the Prophet has become more and more a self enclosed community, seeking to define itself in opposition to the prevailing culture, rather than encouraging the recognition of common values. Every prophet that we learn about in the Quran addressed his society as “O my people,” whether they agreed with him or not.

The times we live in necessitate an exploration of Islam that explores its soul and spirit, its heartbeat. Beyond the dogmatic formulations, the institutional arrangements, and the official spokesmen, lies a vast dimension of lived experience—of arts, literature, and music, of human relationships, of spiritual energy.

Yet what unifies these diverse dimensions of “Islamic” experience is the relationship to a single text, the Quran, and the character of one man, Muhammad. The relationship to the Quran is a perpetually unfolding dynamic that does its work on the soul, awakening an awareness of the master truth of existence: the human need to be in continual relationship with the Real (al Haqq), that wholeness signified (for Muslims, as well as Arab-speaking Christians and Jews) by the word Allah. Allah is not a Muslim god to be compared with other gods, but a unified, comprehensive reality that fulfills the ultimate longing of the human being.

And it is the human model that is Muhammad that offers us an integration and embodiment of this high truth and signifies the possibility of living under the inspiration and guidance of a unified, holistic reality. A profound relationship exists between the text that is described as “divine revelation” and each individual consciousness that directly engages with it. It is a relationship that is humanizing, transformative, and ultimately spiritualizing. Many Westerners who have come in contact with the energy of this revelation have undergone a change of character, and an entry into a new universe of meaning, despite all the prejudices, fears, and misunderstandings that abound regarding Islam. Some have understandably resisted explicit conversion, possibly because it is so often associated with the customs and externals of a foreign culture, yet have taken on the hue of its truth, in some cases conveying its quality to their own religious framework as Christians, Jews, or even Hindus and Buddhists.

Beyond the various claims to authority, correctness, and orthodoxy is a transformative spirit that is rooted in an intimate connection with the still and quiet, yet majestic and awesome Sustaining Power of existence. This transformative spirit is not captured by anything in man that is self assertive, aggressive, exclusive, or dogmatic.

The term holistic is used here as a corrective to suggest an organic wholeness that is obscured when we focus primarily on outer observances, formulations of belief, and doctrine.

While the term holistic Islam does not occur in the Quran, nevertheless the term Din al Haqq, the religion of the Real, suggests a phenomenon beyond institutional religion and theological formulation as when it says the religion of truth will prevail over all religion. This is precisely what we mean by holistic Islam, a higher force which when experienced brings with it a quality of certainty that is not dogmatic and exclusive, but liberating, comprehensive, and universal.

Above all, holistic Islam is transformative, a pathway leading from a limited egoic consciousness distorted by bias and contradictory desires, toward higher states of awareness and realization (marifah) and unconditional love (rahmah). In contrast to this, dogmatic and prescriptive religion is one dimensional and missing the very essence of the original revelation and the prophetic example. Instead of a system of legal prescription, holistic Islam is a path of spiritual perception. Instead of a religion of fear, it is a religion of Love.